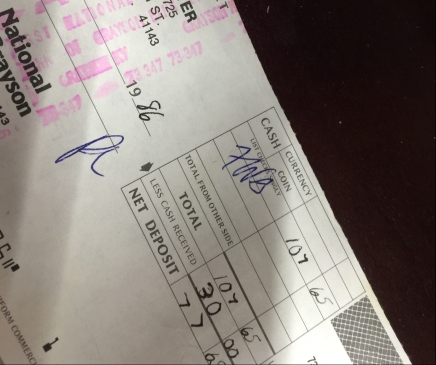 I’m not a hoarder. My wife says I am, but anyone that’s been married long enough knows that hoarding is a relative term. But unlike concert shirts and Levi’s from the 90’s, paper records of any kind is definitely something I don’t hang onto.

During a cleanout and organize effort this week, an envelope surfaced containing an interesting history of my first couple of years of teenage checking account history. There was a multitude of checks written to a pizza restaurant that I still frequent three to four times a week. There were plenty of $10 checks written to gas stations from a time when $10 could still get you a fair amount of gas. And there were even a check written to a friend that I paid to type up a senior research paper for me.

Maybe the most interesting thing was the deposit tickets. Specifically the amounts that I was bringing home for a 40 hour work week. A big fat $107.65 in July of 1986, just after I’d graduated from high school (minimum wage was $3.35/hour).

It’s not that I didn’t do good work or do hard work. I was doing cable TV and satellite dish installations, mostly doing the things that the older and more experienced guys preferred not to do. Running cable lines through brier and chigger-infested fields. Crawling under houses with wet foundations and clearance that only a skinny teenager could navigate. Digging post holes, mixing concrete, and digging by hand through packed down gravel driveways.

It’s just that I was doing work that didn’t require any special skill other than a willingness to work, along with some degree of physical fitness. My skill set couldn’t demand higher wages and there wasn’t more money available to pay me if it did. I eventually left for college and my workplace functioned fine without me.

Of course I wasn’t living out on my own at the time, so my expenses were minimal, other than pizza and gas. But it would have been pretty absurd at the time to insinuate that my employer would have been obligated to give me a better pay rate if my life situation was different. If I’d had a wife, kids, and a full basket of living expenses, it wouldn’t have changed the reality of my limited skill set. And it wouldn’t have changed the limited funds available for payroll expenses.

So how did we reach this point where it’s hard to avoid all the talk about a government mandated “living wage” or $15/hour minimum wage? I don’t know how we got here, but I’m certain that it’s a dangerous place to be if we don’t use our brains and reverse fields. To believe that these ideas can simply be breathed into being without disastrous consequences is wishful thinking to the extreme.

Beyond the correlating price hikes associated with unsustainable minimum wage hikes and beyond the damage that small business will suffer, there’s the rather large matter of making a whole lot of people unemployable. When the government basically makes it illegal to pay workers what they are worth, then those entry level workers simply won’t be hired. It’s that simple.

At any given time, there are millions of teenagers who are finishing up, and many times completely wasting,  a perfectly good public or private K-12 education. They’re not going to learn a trade or go to college and earn a degree that pays. Their best hope is to simply get a job, any job, regardless of pay, and learn what it means to work. When entry level wages are inflated to false levels, those kids won’t be hired…….ever. No employer is going to pay $15/hour for someone that can’t produce. It’s just not going to happen.

Those who lack skills will be deprived of any opportunity to develop skills, work ethic, and learn what it means to hold down a job. And they’ll be cursed to depend on their parents a little longer, and perhaps the government for their whole life. And maybe that’s just what some political movements desire. Dependence.

$3.35 an hour. No, I wasn’t learning a specific skill back in the 80’s while earning that wage. I was learning what it means to work. Show up every day and follow directions. Respect authority and pull your weight. Don’t ever just do enough to get by. Be willing to do unpleasant things and give your best effort. Don’t create messes and problems for your co-workers to finish or clean up.

Work ethic. It’s not exactly on the rise as each generation of workers changes to the next. So how do young people learn to work? Well, by working, of course (and by being made to believe that they MUST work). We need to be able to pay them what they’re worth while they learn. Because you gotta start somewhere.