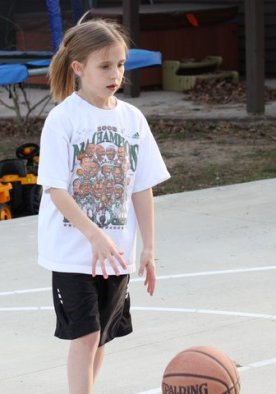 Picture it. A spunky 5th grader dribbles the ball across midcourt and loses her dribble. The defender scoops it up and goes in for an uncontested layup. In the two following trips, the same flustered girl throws ill-advised passes that have no hope of reaching her teammates and four more points are tacked on the scoreboard for the opponent. Trailing by ten points now late in the 4th quarter, all hope of winning the game is lost.

This young player, she knows exactly where her dad is sitting. After each turnover, she catches him out of the corner of her eye as she turns to sprint back on defense. His body language depicts anger and frustration. He leans back in his seat with excessive drama, throwing his hands in the air. She looks to her coach on the other side of the floor. His reaction is no better. He jerks his head back, rolls his eyes and stares angrily at his point guard.

She knows what went wrong. But she’s also smart enough to know that she’s not big enough or strong enough to make all the plays that are going to win every game. She needs more practice. She needs encouragement and patient teaching. And she needs freedom to have small failures without shame.

The game is lost. But more importantly the slide toward losing the kid is already in full motion. The steps toward confidence building just ran into a brick wall.

Somewhere in the gym sits an innocent bystander. He has no interest in the game’s outcome on the scoreboard. As the game unfolds, he watches intently, but his eyes aren’t on the same things as the coaches or the overly excited parents. His focus is on the looks on the players faces. Their reactions when plays don’t go their way. Their reactions to the coach’s instructions. Where their eyes turn when they know they’ve made a mistake. How they react to the words and body language of mom, dad, and coach. He wonders to himself if each player will be ruled by fear or by confidence as they grow older.

He’s watched enough kids in enough games that he’s disturbed by it all. To him, the kids are obviously overwhelmed by it. What should amount to simply playing and competing in a game, quickly evolves into playing to please adults. The joy and the freedom of children is stolen from them. When the atmosphere of this game is multiplied by 60 or more times a year for multiple sports over the course of grades 3 through 8, where does this leave a young athlete? Just messed up in many cases.

Fear, doubt, and lack of confidence. These things exist and grow pretty well inside the minds of kids without being fertilized repeatedly. There’s an awkward stage that may not go away until…….well, never for some. For youth coaches and parents alike, we’re all somewhat guilty. So much of what we do and say consistently over the long haul only serves to make it worse.

In the end, kids give up on sports and walk away for the wrong reasons. Not because of lack of ability, but because the fun left long before it should have. The doubts and fears eventually become too much. The pressures of misguided parents and youth coaches take their toll. Parents try to claim the level of excellence their child will reach. Efforts of youth coaches focus on simply winning. Player development and mental approach to the game are neglected by all.

So how do we change it? First of all:

Really, just stop talking and start cheering. That conversation you’re in danger of having with your kid in the car after a game, it’s worthless. The cumulative effect of your words, game after game after game X300, about what they can do better………is that they want you to shut up. They live in danger of reaching the end of their high school career someday, believing that they never played a single game that pleased their mom and dad. What you’re saying isn’t necessarily anywhere close to what they’re hearing.  And all that coaching you do from the bleachers, just stop. Most of the time, it’s just instructions on how your kid can score more, and not tips on how the whole team can fare better. You’re not helping. You’re cultivating selfishness and confusion. Just let them play. Just let them be coached. Just let them have fun. Just let the experience be theirs. In the end, you can’t pick your kid’s level of excellence. But you can help cultivate a love for the game, boost their confidence, and teach the values of work ethic and being a great listener. Yeah, it’s good to focus on those things.

Be a cheerleader during the games. Don’t obsess over outcomes. See what you need to address in practice. Address it in practice. Games are the times when we all tend to wreck our kids’ heads. Instead lead their hearts and heads every bit as much as you coach their actions.

The greatest skill that youth coaches need is the simple willingness to smile and clap their hands.  The kid that just missed two straight wide open layups? That kid that just got a scowl from their mom? The one whose dad is gonna tell him, on the car ride home, all the corrections to be made so he can rack up 30 the next game? Yeah, every time those kids hit the inner turmoil of failing to meet their own or their parents’ twisted expectations, they need to see an assuring look from their coach. This is where your body language shines. Smile, clap your hands, and belt out one of these magical phrases:

“Keep shooting, the next one’s going in”

“Hang in there, just keep fighting”

“Keep you head up”

“Put it behind you. Just be ready to make the next play”

I could drag out these points for pages and pages because I’ve made every parenting mistake along with every coaching mistake.  So maybe this is the most important point to end with in summary.

Look at your little 3rd or 4th grader on the court today. Give some thought about what your hopes are for them when they’re 18. If your goal is athletic greatness, I suggest that you adjust that just a bit. Maybe you can lead your kid in this direction:

“I hope my kid is able to play totally without fear of any task or any opponent, without fear of making a mistake, and with complete determination to simply do their job the right way every single time”.

Is this the direction we’re leading our kids in? I don’t think it is. I know I failed miserably in this area. And I know every court and every field is full of fearful kids. Most every time I look at the face of a kid in competition, they look like they’re afraid to make a mistake and most don’t respond well when they do. The fun is leaving. Let’s change that.